After an autograph session on Langley’s front stretch, the green flag waved at just after 8 PM. The team entered the race in a ‘conserve tires mode’ – and was following that strategy – until lap 45.

While running in 9th position on lap 45 – coming off of turn 2 – Renee was drilled in the left-rear nerf bar by LW Miller – causing her to spin. As several other cars were collected – Renee went down a lap trying to pull away from the wreck. Twice the car was brought to pit road – examining damage and making repairs. When the green flag waved on lap 49 – Renee was just exiting the pits and was over a half a lap behind the field. Dupuis ran the car hard – running lap times equal to the leaders – but, with no cautions, eventually went down another lap on the track. 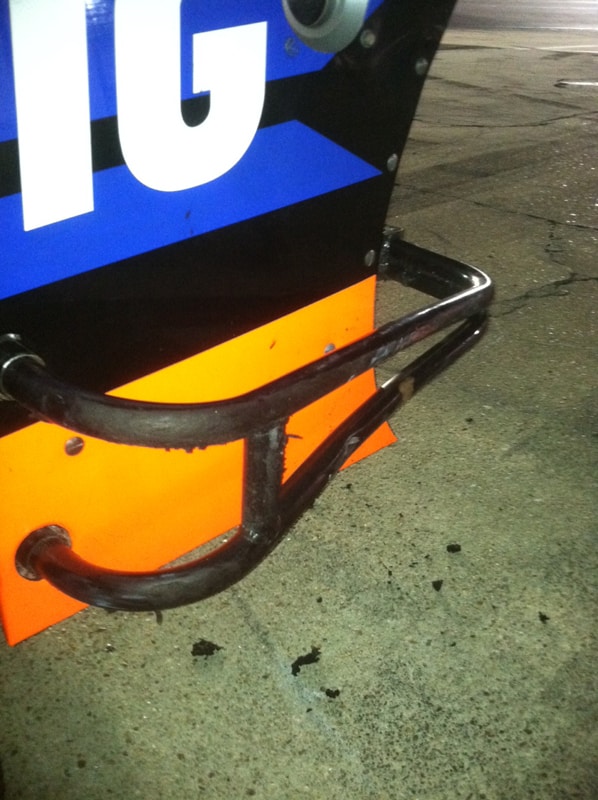 The telltale rubber on the No. 59's left-rear nerf bar.

When getting lapped by Miller – Renee chose to take him wide on two separate occasions  – a clear sign of her displeasure with his earlier antics. On the next lap, Miller came close to wrecking himself on the front stretch when he unsuccessful tried to dump her again.

“LW clearly dumped us. So, when he attempted to go by later in the race, I took him wide – twice. I took him wide – I did not wreck him. As I pointed out to the officials in the trailer – I’ve been doing this a long time and if I wanted to wreck him – I would have. I made a decision to show him I was not happy but I did so in a manner that didn’t put him or anyone else on the track in jeopardy. Now, when he came back after me again on the front stretch – he did so with the obvious intent to wreck us. But, apparently, NASCAR didn’t see it that way. So, they black flagged us. I’m yelling on the radio trying to find out what the flag is for – is it a stop and go – what’s the deal? But neither my spotter, Carol, nor the guys down in the pits could get an answer from officials. So, I bring the car to pit road while we’re still trying to get an answer from NASCAR. Several laps go by and we still couldn’t get an answer – but there was no official holding us in the pit stall – so I went back out.”

Apparently unhappy with the fact that the car returned to the race, NASCAR then parked the car and invited Renee and Ed to meet with officials in the NASCAR trailer at the end of the race.

“I wasn’t paying attention to the time, but the rest of the crew informed us that Ed and I spent about 45 minutes in the NASCAR trailer,” explained Renee. “Without going into the ugly details, suffice it to say we didn’t see eye to eye on much of anything.”

In the final rundown, Renee was credited with a last place finish.

“To add to the frustration, we have been to three WSMT races this season (Hickory, Caraway and Langley) and been taken out twice

[Burt Myers put Renee in the wall on the last lap at Hickory and LW took her out at Langley]. We’re two for three and NASCAR hasn’t done a thing about it…”

Either gluttons for punishment or showing perseverance, next up, the team has filed an entry for the NASCAR Whelen Southern Modified Tour portion of the inaugural UNOH Showdown on September 10-11 at Connecticut’s Thompson International Speedway.