Next up, the teams participated in an on-track autograph session; with Renee being interviewed by the track announcer. With rain in the area – the race start time was moved up – taking place immediately following the meet and greet. 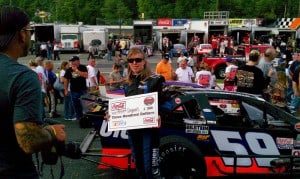 During the Caraway autograph session, Renee is presented with the "Coca-Cola Move of the Race" award from the previous week's (South Boston) event. Mark Whitney Photo.

At approximately 7 PM, the green flag dropped on the 150-lap race. Starting from the outside of the sixth row, Renee quickly made her way into the top-10. But, following a red flag on lap 36, Dupuis began to struggle and the car dropped several positions in the field. Prior to the halfway break, the team pitted several times for adjustments.

“During the halfway break we discovered the front tires were so rubbered over, the guys decided to swap the tires front to rear,” offered Renee. “After the change, the car was much improved.”

As evidence of such, during the second half of the race the No. 59 car continued to move up in the running order – and was up to the 10th spot on lap 136; and into 8th by lap 145. While restarting in the 8th position on a lap 150 restart (the first of what would become three green-white-checkered restarts) Renee sustained significant damage to the left front. Unable to continue, the team ended up 16th in the final rundown. A lap-by-lap replay of the event can be found here.

With a lengthy break in the WSMT schedule, the team will next be in action in an Ed Bennett owned No. 59 in a 150-lap WMT event at New Hampshire’s Monadnock Speedway on Saturday, May 12. For those not able to make it out to the track – please follow along on NASCAR’s Home Tracks website.