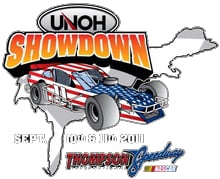 Over the past weekend, Renee competed in the UNOH Showdown at Connecticut’s Thompson International Speedway. 46 cars in were attendance for the inaugural combination NASCAR Whelen Modified Tour and Whelen Southern Modified Tour event – which featured twin 125-lap features followed by a 50-lap shootout.

Following two practice sessions, each series participated in qualifying – where Renee turned in the 15th fastest time for the WSMT.

On Sunday morning, all of the teams in attendance participated in an extended autograph session on Thompson’s front stretch.

At approximately 1:30, the green flag fell for the WSMT 125 lapper. Renee wasted no time moving forward and was running in 8th place by lap 25. Just 10 laps later, she moved into 6th position. However, just a few laps later Renee experienced a loss of horsepower.

“We obviously had a really good car so it was really disappointing,” Renee explained. “Up until that point we really were just riding around out there – it was early, we were just saving our tires.”

In the end, the team discovered a plug wire had fallen off – so essentially Renee ran the last 90 or so laps on just seven cylinders. The team was credited with an 11th place finish.

In the 50-lap shootout, Renee started from the 10th position. The team opted to drop out of the race at about the half-way point when they felt they had more to lose than gain.

“We didn’t like the pack of cars we found ourselves running with and felt we stood a strong chance of getting wrecked. So, like several other teams, we just plain pulled the plug.”

A re-cap of the weekend activities can be found by clicking here.

Next up the team again heads south to Tri-County Motor Speedway for a NASCAR Whelen Southern Modified Tour race on Saturday, September 24.