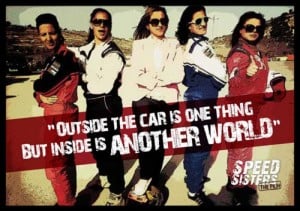 gearhead girls racing recently invited Renee to a unique and exciting event which has been established to connect America’s racing ladies with the Speed Sisters. The Speed Sisters are the first all-woman motor racing team in the Middle East.

On March 3, 2014 this once-in-a-lifetime track day and reception will be hosted at Connecticut’s Lime Rock Park and The Falls Village Inn. Proceeds from the event will help fund Speed Sisters The Film – a forthcoming documentary supported by the Sundance Institute and BritDoc Foundation. For more detailed information, please take a moment to read the Press Release.

During the event, gearhead girls racing will host Marah Zahalka, the youngest of five Speed Sisters. Marah is slated to speak at TEDxTeen in New York about her journey as a driver in Jenin, part of the Occupied Palestinian Territories. Against a backdrop of political upheaval unimaginable by many here in the US, Marah bonded with the Speed Sisters over a common desire to live life on their own terms. She’s now coming here to drive on American soil and share her story.

The Speed Sisters documentary is both intimate and action-filled; and captures the drive to follow your dreams against all odds – leaving in its trail shattered stereotypes about gender and the Arab world. The ﬁlm has already built an enthusiastic global audience and articles about the Speed Sisters have appeared in dozens of top publications. Join the tens of thousands of people that have already viewed and shared the trailer for this work in progress.

Stephanie Economu, founder of gearhead girls racing, has long worked to fill a need for women racers by founding an online community for networking with other drivers. Renee had the pleasure of meeting Stephanie several years ago when she was working with the prestigious Lime Rock Drivers Club. The two became fast friends and have kept in touch since.

The track day and reception on March 3 creates an opportunity for women from both sides of the world to celebrate what can be accomplished when a team pushes ahead at full speed. Both Stephanie and Renee invite you to join the history making event! To RSVP or to make a donation, please visit the gearhead girls racing website.