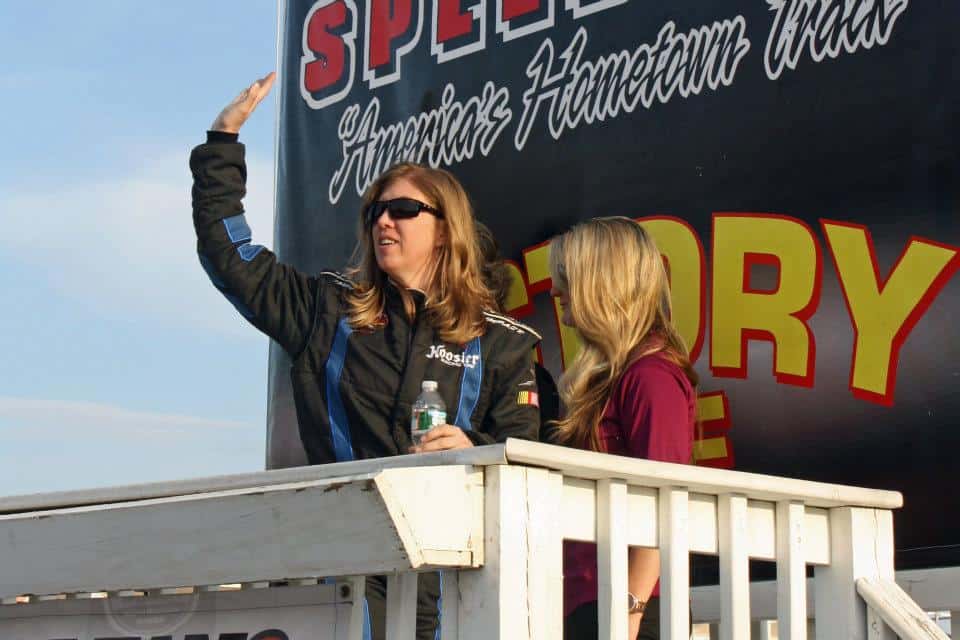 After a disappointing showing in practice, Renee posted just the 20th fastest time of the qualifying session.

She explained: “It’s a real fine line between running the absolute daylights out of the car and just plain over driving. We made some changes to the car between practice and time trials, and – in trying to give it everything I’ve got – I just plain over drove the car on the second lap of time trials.” Dupuis’ first lap was almost .40 faster than her sticker time trial run during practice.

Following an on-track autograph session and driver introductions, the green flag dropped at 7:50 PM. On just the 19th lap Renee got caught up in an accident and went down a lap trying to pull away. With damage to the left-front suspension the team pitted several times for repairs. When the green flag again waved the team picked off spots – attempting to save the car while waiting for the lucky dog.

“Even after the wreck we had a really good car,” Renee offered. “It was just torture trying to get back on the lead lap.”

By the halfway mark, Renee was still a lap down (in 17th spot) but was running lap times faster than the lead pack. As such, during the halfway break, the team made only a slight air pressure adjustment.

When the caution waved on lap-90 the team was finally named the free pass car. Back on the lead-lap, Renee began her march forward and was up to 11th place by lap 135. When the checkered flag flew, Renee ended up crossing the finish line in the 9th spot. Full race results can be found here.

Moreover, as Renee advanced 11 positions over the course of her 2012 debut, she won the Coca-Cola ‘Move of the Race Award’ (the honor is given out at each NWSMT race to the driver who advances the most positions during the event).

“After struggling during the day, come race time, the guys gave me a great car. We weren’t really able to show it until late in the race. But it sure seems like we were one of the only cars that was going forward in the late stages. It’s a pretty strong statement when you can pass on both the inside and the outside that late into a run. In the end we were still going forward – we just ran out of laps.” 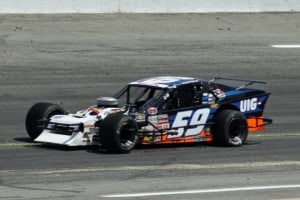 A lap-by-lap replay of the event – courtesy of NASCAR – can be found here.

With a quick turnaround, the team will next compete at Caraway Speedway on Saturday, April 21.

With a lengthy break in the Southern schedule, the ‘Parking Lot Maintenance Headquarters 150’ at Caraway Speedway, is the last NWSMT event on the schedule until the Series returns to Caraway on Friday, July, 6. During the extended break, the team is scheduled to compete in the New England region in several NASCAR Whelen Modified Tour events.